Finally. It’s been a hot, dry summer but this week some meaningful rain arrived for the first time in months. We could use more, but for now it’ll do. Coupled with cooler temperatures, particularly at night, the fishing has responded!

For the first time in a couple months, I can recommend trout fishing in a river besides the Swift. The upper Deerfield has turned the corner for now and provided some decent fishing this past week. I would still concentrate on the water above Charlemont and I personally would target the dam releases and the increased flows they bring. Big dries like Chubby Chernobyls, Stimulators and hoppers with a nymph dropper can work well in the higher flows. Straight nymphing a big stonefly or mop with a smaller mayfly or caddis nymph can also work well in the bigger water as will smaller streamers.

At lower water when they are not releasing, things should still fish decently. For dry flies, I would stick with terrestrials like Chubbies and hoppers but maybe downsize the offering a touch. Beetles and ants will also work. If you are in the right place at the right time, you may stumble upon a flying ant “hatch.” It is actually more of a spinner fall as these flying ants will mate in huge swarms and then fall dead onto the surface of the river. They can be anywhere from a size 14 to around a 22, and are generally black or reddish in color, so I would have a good assortment of patterns on hand as the fish will key in on these and get very choosy, especially about size. I have most often seen these swarms on hotter, muggier days in the early to mid afternoon; and it can be a sight to behold as it seems every fish in the river is picking these bugs off the surface. 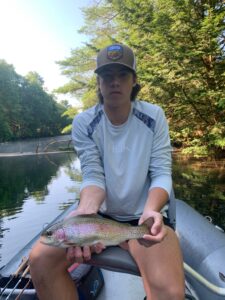 There are some Isonychias hatching as well as BWOs and there are always caddis around. For Isos, the CDC Slate Drake is a good dry pattern, though a big parachute Adams will often do the trick as well, and the brown gilled nymph or a Zug Bug is a good choice for under the surface. These are bigger bugs in the 10 to 12 range. BWOs are generally 18 to 24 or so. Sparkle duns and parachutes are my go to for dries and smaller pheasant tails seem to do the trick for the nymphs. Most caddis will be in the 14 to 18 range; though be on the lookout for the stirrings of the October caddis that will be more of an 8 to 12. Big orange nymphs and soft hackles have produced well for me this time of year.

The Deerfield Fly Shop will be offering its first ever hosted trip this fall! Come join us October 10 to 13 in the remarkable waters around Charleston, SC, as we hunt for tailing redfish on the flood tides. The trip will include lodging, local transportation and three full days on the water with some of the Charleston areas best fly fishing guides and their flats boats. Please call the shop or email brian@deerfieldflyshop.com for more details.

The Swift is the Swift and is still fishing as it always does, though I have heard increasing reports that it’s been tougher as of late. I would think the added pressure of being the only trout game in town for awhile has wised up these already well educated fish.  Smaller hoppers and other terrestrials can work but you may need to get super small again to get more consistent action. Luckily we have re-loaded on tiny flies, tied locally by Matt Tempesta, to fool these wary fish.

The East Branch of the Westfield is at a decent level though I have not heard what the temperature is there. If it is below 68 this river could start fishing well again. 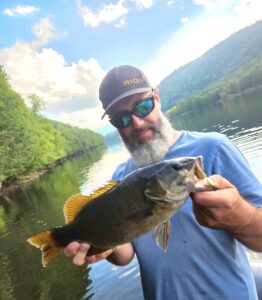 The bass fishing remains very good and will only get better with the increased water and lower temperatures. These next six weeks or so can be some of the best bass fishing of the year for both small and largemouths as they beef up before temperatures get too cold.

The Connecticut River is loaded with bait, particularly small shad, right now. Topwater will still be effective but I would start thinking more about streamers now, too. I start smaller, say a size 2, and begin with white but then check out olive then tan and other colors until I key in on what the smallies are hitting.  As we get into fall, I will up the size of my streamers and move toward articulated patterns that act like injured baitfish. They tend to get pretty aggressive in anticipation of the leaner winter months.